On What I Said on Sunday 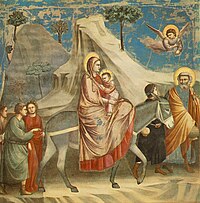 (Note: These are the few words I said on the Second Sunday of Christmas as a Homily at Mass. I have left it in the form that I spoke from and I apologize if that makes it harder to read. I must confess that I had to resist the urge to make it all rhyme while writing it in this format, but it does make it far easier to speak from! Regardless, I hope you find it beneficial. Of course, the links are to whatever I was citing or alluding. The scripture readings were Jeremiah 31:7-14, Ephesians 1:3-6, 15-19 and Matthew 2:13-18.)

"This was to fulfill what had been spoken by the Lord through the prophet,
'Out of Egypt I have called my son." Matthew 2:15

+In the name of the Father, the Son and the Holy Spirit.

St. Joseph and Our Lady would have known Egypt.
As a part of the Roman Empire, travel between it and Palestine would have been relatively easy,
but – more importantly, it was out of the reach of King Herod.
For (as we just heard), Herod in his raging heard that the Messiah was born,
and he wanted to rid himself of this meddlesome child who might threaten his throne.
Inspired by a dream, St. Joseph, Our Lady and the Christ Child pack up for Egypt
and left in the middle of the night.

I think this is because St. Joseph and Our Lady would have known Egypt
in a more deeper, more spiritual way then perhaps we do.
The knew the stories of Egypt
because every Passover at every Year, the youngest child asks the oldest person,
"Why is this night different than every other night?"
And for the rest of the evening, tales of bondage, slavery,
tales of bricks-made-from-grass and bitter herbs,
retell the darkest time in the history of the Jewish People.
Most especially, they knew that Egypt didn't care for Jewish Children,
as another wicked King – the Pharaoh,
feared that his reign was threatened by the growth of the population of the Israelites,
who moved into his kingdom after the death of Joseph the Patriarch,
so he tried to have all the Israelite boys killed shortly after their birth.

So, perhaps, Our Lady and St. Joseph knew in their blood
that Egypt was a place of darkness,
of idols, of slavery and of fear.
And, yet, they are called to flee to it in the middle of the night by a dream,
This would be like someone saying to us:
“Somebody in Erwin is trying to kill me,
so I'm running off to the safety of downtown Atlanta.”
And then they flee at night with a car stocked with bottles of water and snacks.
We would rightly think that they are crazy.
We might say to ourselves, "Who does that?"
But this is exactly what God called St. Joseph, Our Lady and Our Lord to do.
He called them to flee into the land of bondage,
to run into the land of fear and the land of darkness.
To run into that land of death.

And, He is calling us, too, perhaps,
to flee into the land of Egypt.

it may be a relationship,
it may be a business partnership,
or it may be a memory.
It is the land of work without results,

Like the Holy Family, we know of Egypt.
But, we also know of the Christ Child. too
For, This, this is Christ the King, whom shepherds guard and angels sing;
We know that He is God from God, Light from Light eternal,
abhoring not the Virgin's womb.
We know this Christ Child who of the Father's love begotten,
ere the worlds began to be, he is Alpha and Omega,
He the source, the ending he.

We know the Christ Child just as well as we know those shadowy corners of Our Egypt.
We know that our stubborn wills melt in front of his innocence,
We know our wealth becomes as rags in front of his poverty.

We know that he made himself of no reputation, and took upon him the form of a servant,
to free the Children of Men from their sins, from each other and from themselves.
We know the Christ Child and thanks be to God that we do!

Like the Holy Family, we are not called to Egypt –
to Our Egypt – alone!
No, for we are called to take the Christ Child and flee into that land of darkness,
and expose Our Egypt to the light of the Christ Child.
Expose the terribleness of Our Egypt's murder to the innocence of that Child,
See the futility of idolatry fade in the faithfulness of that Child.
Let that Child gather from Our Egypt,
from the furthest parts of our darkness, our pain, our sin,
all that is blind, all that is lame;
all that is in labor with wickedness
and that which gives birth to a lie.
Let the Holy Child gather it up and heal it.

The purpose of Our Flight into Our Egypt
And the flight of the Holy Family into Egypt,
Is not to conquer it nor to destroy the darkness,
but to transform it!
For as St. John Chrysostom said about this transformation:
"The nation that had been the persecutor of this first-born people,
is now the guardian of his first-born son."
They who once killed Hebrew babies, now protect the most important Hebrew baby.
They who once were cruel taskmasters, now guard the life of Our Christ Child.
They who exposed and killed, now serve and protect.
In much the same way, that which once held us in bondage and fear,
will transform into freedom and peace,
in the presence of the Christ Child.

Those mute idols and those Brutal Taskmasters,

shall come and sing aloud on the height of Zion,
and they shall be radiant over the goodness of the Lord.
when we flee into the darkness with the Christ Child of peace.
That which once was scattered will be gathered,
And the Christ Child shall keep us like a flock,
gathering us even from Egypt.
for he is our true Shepherd,
for he is our God,
who will lead us by brooks of water and in a straight path in which we will not stumble.

The purpose of the flight into Egypt is to gather up that which is lost.
and to transform it in the presence of the Christ Child.
So, take the Christ Child into your Egypt,
into your land of Darkness.
Say to that Christ Child,
What can I give Him, poor as I am?
If I were a shepherd, I would bring a lamb;
If I were a Wise Man, I would do my part;
Yet what I can I give Him: give my heart.
Let us give him our hearts, let us give him our Egypt's,
So that we may stand and say in the words of the Prophet Hosea,
“Out of Egypt, have I called my son.”
We flee to Our Egypt with the Christ Child so that we may say,
in my Egypt, in my darkest hour, in my darkest heart-of-hearts,